Umami in a bottle. It’s pleasantly salty and well-rounded.

Historically, fish sauce producers could be found along the entire Japanese coastline. Yet in the early 90’s, due to the old age of producers and a lack of demand, the number of producers dropped dramatically.

Hideki Moroi, a third-generation soy sauce, miso and pickle maker, felt a deep sense of responsibility to revive shottsuru. With quiet dedication and many years of experimenting, fermenting and taste testing, Moroi created a product that he was proud to sell.

This 10-Year-Old Shottsuru is an elegant, beautifully nuanced fish sauce which rivals if not thoroughly surpasses the best Italian Colatura.

Shottsuru (fish sauce made from sandfish) had been made for centuries along the coastline of Japan until it almost died out in the 1980s. It was with a deep sense of responsibility to revive the craft that Hideki Moroi began making Shottsuru. Shottsuru is made from sandfish (Hatahata) which is fished in December and January. The process begins with mincing the whole fish together with Japanese sea salt. The mixture is then fermented slowly for a minimum of 12 months and for up to 10 years. The juice is then simply pressed out and bottled. Hideki Moroi has been recognised by Slow Food for his contribution to world culinary heritage and has achieved his aim of having Shottsuru celebrated around the world. 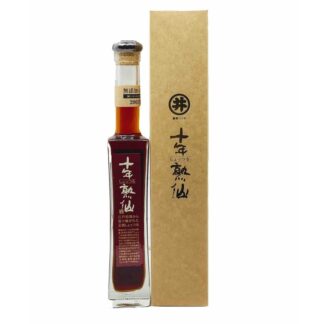