This Vitamin C Booster is a Vitamin C supplement featuring the native Australian Kakadu plum, the highest known natural source of Vitamin C. It also contains the essence of finger lime which has a high fibre and Vitamin C profile. Completely natural, the Vitaman C booster is blended with pre and probiotics to deliver a scientifically-proven daily dose of goodness such as heighten immunity, improve performance and enhance mood

With a pleasant orange flavour, the blend can be easily added to smoothies, salad dressing or mixed with water or juice.

This Vitamin C Booster features the native Australian Kakadu plum, a nutrient-dense fruit found throughout the tropical woodlands from north-western Australia to eastern Arnhem Land. Regarded as the highest known natural source of Vitamin C – the Booster contains 400 per cent of your daily requirement. The Kakadu Plum also contains high levels of Vitamin E, folic acid and carotenoids, which reverses the effects of free radicals and reduce the symptoms of ageing.

For every great hero, there’s a trusty sidekick and, in this instance, finger lime packs a lot of punch. Found in shrubs or small trees along the coastal border of Queensland and New South Wales, the finger lime is small but mighty, with a high fibre and Vitamin C profile. 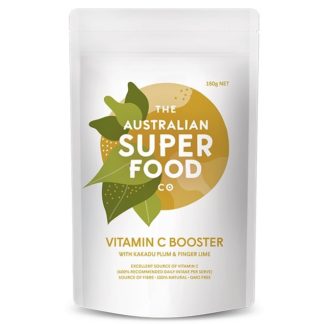