Colatura di Alici (Anchovy Sauce) is an ancient delicacy that adds great anchovy flavour to a dish without having to fillet, rinse and chop the fish.

Acquapazza’s Colatura is considered to be the best Colatura on the market thanks to the ageing period which produces such a rich and concentrated product and it can only be found in a limited number of specialist shops in Italy.

This Colatura di Alici (anchovy sauce) from Cetara on the Amalfi Coast is an explosion of taste, an amber liquid with the scent of sea and traditions. The Colatura di Alici Anchovy Sauce from Aqua Pazza is an ancient delicacy that adds great anchovy flavour to a dish without having to fillet, rinse and chop the fish.

The preparation of Acquapazza’s Colatura is simple and natural but follows strict rules that begin with fishing for the best anchovies in the Gulf of Salerno from March to July. The fish are caught, placed in wooden barrels called terzigni, alternating layers with handfuls of sea salt. Then the fish are pressed down with a lid and big rocks. By December after six months, the anchovies have produced a fragrant translucent liquid with an amber hue.

Such a brief description does not do justice to the craftsmanship needed to master this process. What is certain is that the colatura di alici from Cetara is both a simple product because it is made with very few ingredients. And a complex product because it is deeply intertwined with local tradition.

Acquapazza Gourmet is an artisanal company that produces small precious quantities of colatura sauce, always respecting the time needed for the product to mature. The Acquapazza Gourmet colatura di alici ages in chestnut barrels and is only made with anchovies fished in the Gulf of Salerno.

Colatura can also be used to flavour fish, vegetables and pulses instead of salt.

Acquapazza Gourmet, a small artisan company, was founded in the village of Cetara by five friends sharing a common passion: seafood and their village traditions. As a matter of fact, the tiny village of Cetara in the Amalfi coast has a century-long tradition of processing anchovy and tuna, which have always provided the main source of livelihood in the village. Fish and fish processing have always impacted, back then just like now, every aspect of life in the village. The main product of the tiny village of Cetara is undoubtedly the famous colatura di alici, the anchovy sauce. Every product of Acquapazza Gourmet celebrates the flavour of fish of the gulf of Salerno. Fish is prepared according to the most authentic traditions of Cetara, creating small products with a huge value and heritage. Cetara, which is proud of the role in the fish processing industry that the village has played for centuries now, was even declared by UNESCO a Heritage of Humanity thanks to its beauty and landscape. 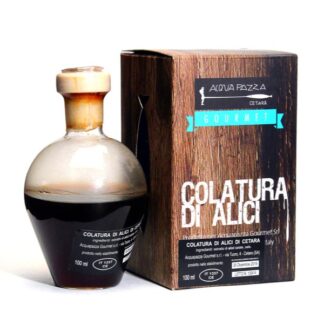